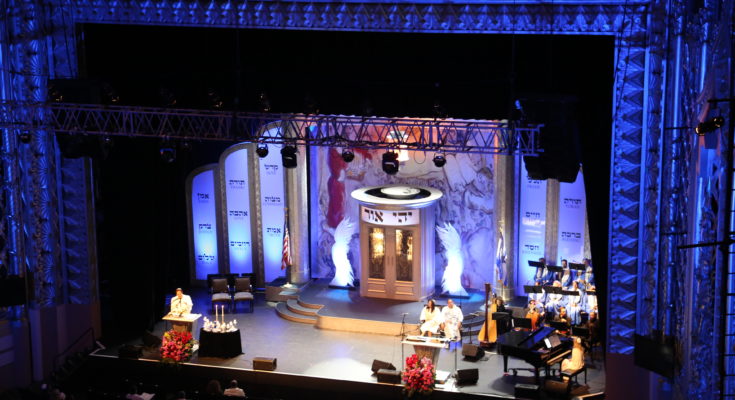 (EXPERIENCE MAGAZINE) — SEPTEMBER 19, 2018 — Rabbi David Baron held Yom Kippur Eve services at the exclusive Temple of the Arts which is located on Wilshire Boulevard at the Saban Theatre in Beverly Hills. The Kol Neidre is a prayer that is sung by Jews at the opening of the Day of Atonement. This is a day of reverence in Beverly Hills, and around the globe for Jewish people. The Temple of the Arts holds special Yom Kippur services annually. The charismatic Rabbi Baron invites celebrities from all faiths. This two day event, held on September 18th and 19th, are the holiest days of the Jewish year. It’s a time for fasting and forgiveness. So many people showed up for this two-day event. There were a group of veterans from World War 2, survivors from the Parkland School Massacre in Florida, and so many others.

Celebrities like American Actor of Japanese descent, George Takei from Star Trek, were on hand to discuss how he and his family were sent to a relocation center during the war.

Members of the press interviewed Joseph Riley from San Diego who also served in the Army and fought on D-Day with the 101st Airborne, along with other veterans who served during the Invasion of Normandy and other wars. Stewart Hedley was another veteran in attendance. Ninety-seven-year-old Peter Du Pre, who served in the Battle of the Bulge, played “God Bless America” on his harmonica. The veterans lit candles on the 19th in remembrance of their fallen comrades. It was an honor to have them participating in this year’s Yom Kippur service. Another special guest in attendance was Dr. Judea Pearl. He is the father of slain Wall Street Journal reporter, Daniel Pearl. Dr. Pearl sang and spoke about his son’s passion for music, and Daniel Pearl Music Month, a global event held annually in his son’s memory.

Survivors of the Parkland, Florida massacre at Marjorie Stoneman High School were in attendance. Ryan Deitsch and Chris Grady spoke to the press and participated in the service. Ryan is a Student Activist Against Gun Violence and a leader of the Mach For Our Lives Demonstration in Washington DC. There were also survivors of the October 1st mass shooting at the Route 91 Harvest Music Festival on the Las Vegas Strip, Justin Reiner, and his wife Laura, were both at the Temple of the Arts for the service. Iconic Television personality from Entertainment Tonight, Mary Hart, attended and participated in the service, as well as renowned film critic Leonard Maltin.

World renowned cellist, Michael Fitzpatrick, performed on Thursday and participated in the service. Michael is the nephew of renowned violinist and founder of the Israel Philharmonic Orchestra, Bronislaw Huberman. Cantors Ilysia J. Pierce and Jordan Bennet both sang and participated in the service, led my Music Director Sharon Farber. They do such a good job. Israeli Defense Forces member, Dan Gordon spoke about happenings on the Gaza border, filmmaker Carole Eglash-Kosoff talked about and screened her documentary film, “AN ARTIST’S JOURNEY – The Life and Art of David Labkovski.”

This year’s Yom Kippur service and Kol Neidre were really about forgiveness and atonement. Rabbi Baron is such a great speaker. He knows how to make people listen and think. Rabbi Baron is so smart and engaging. He talks to people, he listens and he tells you what he thinks. Rabbi Baron said, “All of my guests have incredible personal stories that exemplify the fragility of life and the strength of the human spirit which has been carried out in their respective lives through their acts of courageous deeds and humane kindness, all while bringing awareness and shedding light on subjects which need to be discussed globally. These are all inspirational and motivational messages we need to hear.” Yom Kippur services at the Beverly Hills Temple of the Arts are a time to come together as a community and share a reverence together.
This year’s service was covered by many members of the press with KTLA5, CBS2, KCAL9, NBC4, Getty Images and Wire Image on hand, among others. JLTV (Jewish Life Television) was also presented via DirectTV and Spectrum.
George Tekai at the Beverly Hills Temple of the Arts at the Saban Theatre.

The Experience Magazine is always honored to cover Yom Kippur at the Beverly Hills Temple of the Arts and we look forward to next year’s event.