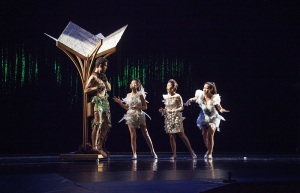 Talented designer Quynh Paris was the costume designer on “The Magic Flute,” Mozart’s renowned opera in Ho Chi Minh City, Vietnam. After showcasing her modern and eclectic SS15 collection at Style Fashion Week Los Angeles in October, Quynh Paris has been working non-stop in Ho Chi Minh City. Quynh was the costume and makeup designer for this legendary opera and she also had a private runway show to showcase her SS15 Collection there. Quynh was requested as the makeup designer, as the makeup had to be in line with the costumes.

“It was the first time I ever designed wardrobe for the opera. But I’m very happy with the end result,” said Quynh.

“At the end of 2013 I was invited to visit the theatre that the “The Magic Flute” would be performed in. At this time there was no set, no costume, no dancer, but only singers singing on stage as it was in the pre-production stage. Actually the Norwegian organization, the Transposition Program, in charge of musical cooperation between Norway and Vietnam, invited me because they already chose me to be the exclusive costume designer,” added Quynh.

“When the organizers announced they wanted me, I was really very excited to work on this project. I am a former violinist, coming from a musician family. I am now a fashion designer. Working on this opera means cumulating two passions and past and present would meet each other and come full circle,” said an excited Quynh.

The lead singers were:

Queen of the Night: Đao To Loan, Vietnam

The director was David Hermann of Germany and the conductor was Magnus Loddgard of Norway. During a four-month period, Quynh designed 30 costumes and created over 100 costumes. Coming from the classical music world herself, as she was a violinist, Quynh worked on this project with infinite passion, making the bridge between classical music and fashion.

During the rehearsal, organizers and singer/dancers were amazed with Quynh’s ethereal costumes and really motivated them to have an amazing show. The organizers could tell that her costumes would be a key of the opera’s success.

The premiere was truly a great success. VIP guests included Vietnamese government officials, Norwegian embassy staff, as well as other artists in the entertainment business and art lovers.

After the premiere, the singers thanked Quynh for designing the wonderful costumes, and the show’s organizers thanked her not only for her costumes, but also for her strong involvement and requested her to work with them on their next opera in early 2015, which is “Carmen.”