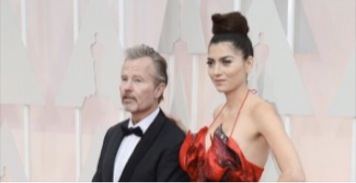 One of talented fashion designer Quynh Paris’ amazing dresses was was front and center at the Academy Awards. Actress Blanca Blanco (Beverly Hills Christmas, Spychosis) wore a red gown of Quynh’s to Oscars, the biggest ticket in town, with her boyfriend, acclaimed actor John Savage (The Deer Hunter, Beverly Hills Christmas, Spychosis). Blanco looked sleek in her updo with her diamond drop earrings, rings and bracelets.

Quynh has had many firsts this month. This was the first time one of her gowns was worn at the Oscar. This was also the first time that she ever had a show at New York Fashion Week (NYFW) and not only that, but she also was the headliner of this year’s show on opening night.

“I am very happy to see Blanca wearing my dress at the Oscars,” said a joyous Quynh. “This dress is very artistic and strong. It’s not just a red, but a truly bold red. Among my dresses, I think Blanca chose this one because it’s close to her temperament and how she wants to be represented for this carpet. If we compare her dress to those worn by other stars this year, her dress is of the boldest red and makes the strongest impression. I’ve got the feeling that Blanca was the most seen woman on the red carpet this year, because she is really gorgeous in this dress. This dress is from my newest collection, the 2015 Fall Winter collection. It has been showcased in NY in February at Mercedes-Benz Fashion Week. Although it’s a fall/winter collection, I wanted to fix winter and summer colors. This dress is among pieces with a summer flavor. But it has also something special. This dress is a flower. Usually flowers have sweet colors, which sometime are shaded off. On the contrary for this dress, I wanted a strong and bold red which does not shy away. This flower is like a flame, flowers dry out with fire but this one is like fed by the fire,” she added.

” Quynh and I worked closely to select the perfect dress for the 2015 Oscars awards ceremony. I wanted something red, sexy and creative that represented passion, love and uniqueness. Quynh Paris’ gown was the most talked about dress of the evening and men and women both stopped by me countless times to compliment me on that creative work of art,” said actress Blanca Blanco. It was a fiery red work of art indeed!

More info about Quynh and her striking designs at www.quynhparis.com