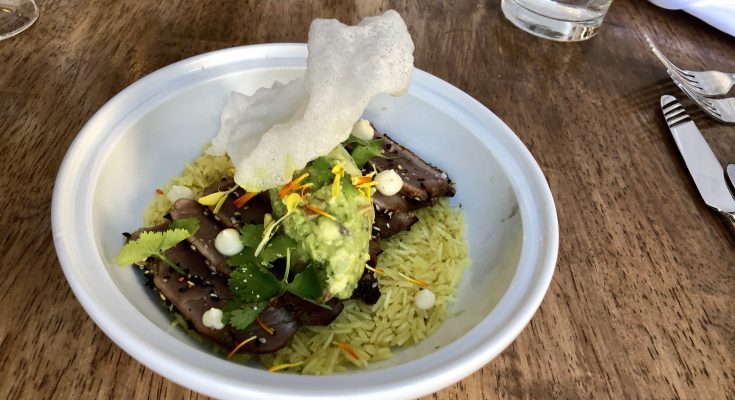 Los Angeles, CA — Monday, June 18th, 2018 — The EXPERIENCE MAGAZINE and the L.A Times PR Department worked together to cover many great events for the month of May.

For the opening night launch party, it was called “Things in a Bowl” and was held at Rossoblu & City Market South. The opening night party had a line up of some great chefs including special guest Yosihiro Narisawa from Narisawa, Japan.

There were many food stations set up including last years award winner Locol. We got a chance to talk to Jonathan Gold before he made his presentation for Best Restaurant of the Year. We made some recommendations to him about some restaurants in Santa Monica including Rita’s Fine Indian and Air:Food which we reviewed recently. We also told him to try out Fig the restaurant at the Fairmont hotel in which we also recently did a review on.

We attended the Thai Tribute to the late Tui Sungkamee from Jitlada restaurant which was hosted by Roi Choi and held at the Line Hotel in downtown Los Angeles. If you have seen “The City of Gold”, Jonathan Gold’s documentary, there is a good scene of him in Jitlada restaurant sampling some
very spicy food and the film is worth seeing just to see the expression on his face. Entertainment was by the Thai Elvis and special guest was Matt Groening the creator of the Simpsons who was a regular at Jitlada.

Matt remembered seeing me play live with Martini Ranch at a venue called The Music Machine which was a music hot spot in the 80s. The event concentrated on southern Thai rather then the northern Thai cuisine that both chefs Andy Ricker (Pok Pok) and Kris Yenbamroong (Night and Market). It was a great evening running the gamut of many fantastic Thai dishes in one evening.

Many restaurants were featuring “Things in a Bowl” and we got to visit Little Sister in Manhattan Beach which was serving Vietnamese chicken curry, lemongrass, and new potatoes which seemed to be the theme for the “bowl” events.

We would go back to Little Sister to have this bowl again because it was an absolute delight with all the great flavors being brought out by the fresh herbs infused into the broth. Another fave of ours is Mayura which had a special potato dish, butter chicken, tandoori chicken, fish curry, breads, rice and salads. This is one of our favorite spots in Culver City.

The Night Market took over Grand Park from the 16-20 and there was fare from some of the finest restaurants and food trucks in the city. There was a lot of great music and this was “the City of Gold” food market. There were a lot of artisan cocktails, chef collaborations and demos, DJs and performances.

This was really four nights of great casual fun in the park with the backdrop being City Hall. Taking the metro there was a breeze because you got dropped off right at the park.

Our favorite event was Plant Power – “The No Beast Feast.” It was an all star chef celebration of vegetable cuisine. Jonathan Gold gave the Gold Award to Susan Feniger and Mary Sue Millken from Border Grill who showed us how we can bring the world together with with tacos and tamales.

There was a great assortment of wine pairings with the fare and it was a cool spring night so we were able to dress before the onslaught of the summer heat.

They had a great dessert station and a nice goodie bag was given out at the end of the evening. This was a real vege and vegan extravaganza and showcase for some of best restaurants in L.A. including Brown Sugar Kitchen, Akasha, Jitlada, Playa Provisions and many others. We hope they do this again next year and will plan our May all around the great L.A. Food Bowl