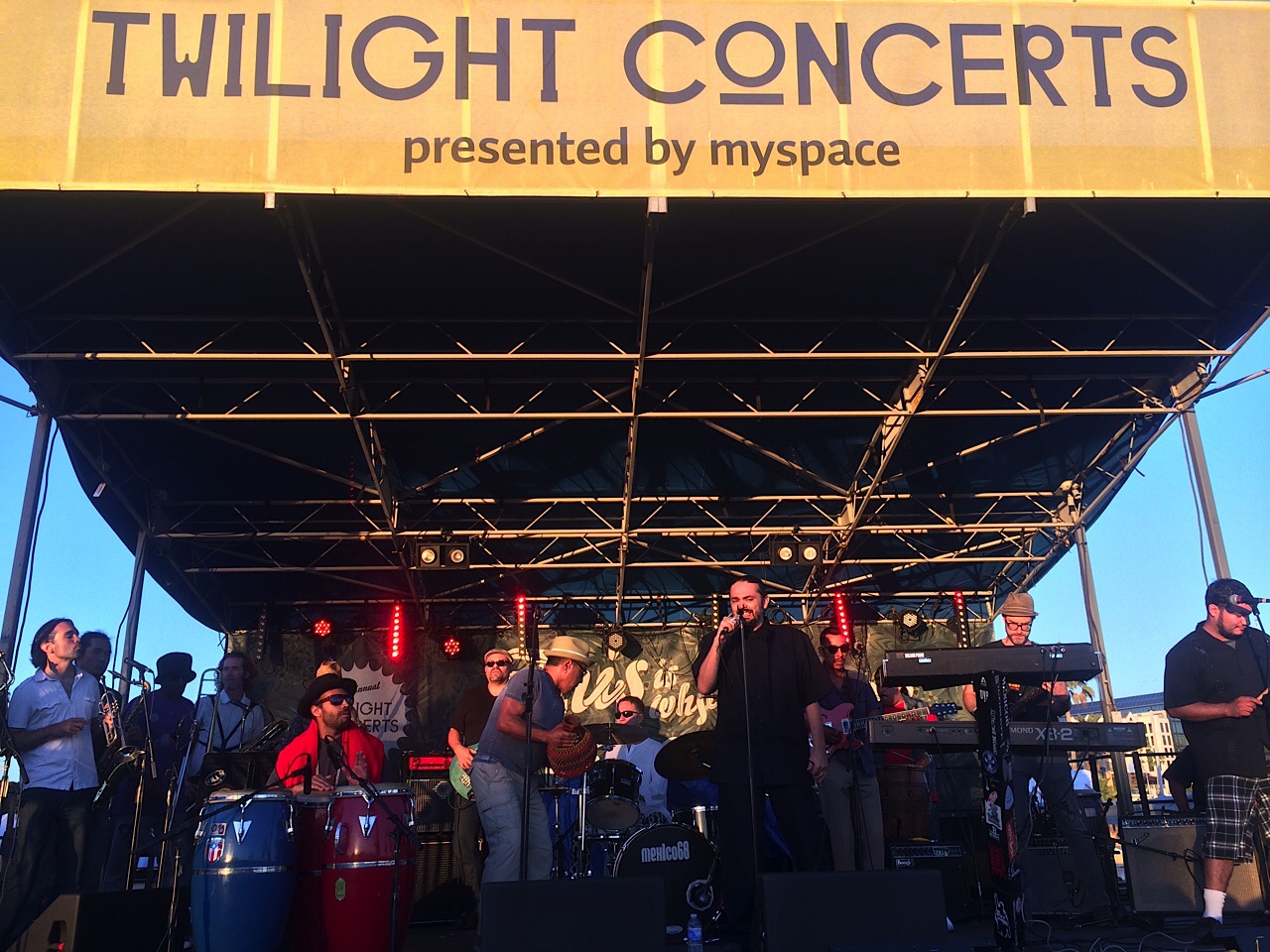 It was great summer of concerts at the Santa Monica Pier Twilight Concert Series. Now in its 30th year, the Santa Monica Pier hosts free concerts on Thursday nights during the summer. The Experience was lucky to attend this event back stage and speak to a lot of the artists up close and personal.
If you’ve never been to the Summer Concert Series at the Santa Monica Pier, you have to try it. Parking is always an issue in this part of Santa Monica. There is $8.00 parking at the Pier parking lot, which occasionally fills up. If you park in one of the cities municipal parking lots, you can expect to pay around $15.00. The concerts are from 7:00pm-10:00pm sharp. A lot of local people walk or ride their bike to this Thursday night event. The sunsets are spectacular from the Santa Monica pier. There are also many restaurants on the pier itself. The third street Promenade is a short walk from the concert area. Third Street also has many restaurants.
July 10th kicked off the summer with two young bands. Cults with James Supercave.  Described as Indie Pop, Cults is a young band from New york City. Headed by musician Brian Oblivion.  Madeline Follin makes up the other half of the duo. Raised in San Diego, they both attended film school in NYC.  Their live sound was interesting and powerful. They had a young rock and roll sound. Madeline is a great performer. She sang with an intense emotion throughout the night. It was a great start to the summer concert series. Coming from the world of film, their music has atmospheric elements to it.
James Supercave played second on July 10th. They mixed pop grooves over a drum machine. Hailing from LA, they seemed to have a lot of fans in attendance. They had a great sound. Many people came to see James Supercave. Their performance was fun and energetic.
Backstage, Jacqueline A. Seabrooks, Chief of Police with the Santa Monica Police Department was speaking with people. The Santa Monica police do such a good job at these events. In 2013, 30,000 people showed up for a reggae concert and it overwhelmed the city of Santa Monica. The 2014 concert series attempted to bring younger and lesser known artists to the stage. The Santa Monica police did a fine job of monitoring and controlling the huge numbers of people that visit the pier.
The July 17 concert was Heavenly Voices. The crowd was very receptive and it was a great concert. July 24th brought PCH Top Down Sounds and Cayucas. Both of these bands brought a lot of vibrant colors and great singing. The sound system had a few issues on this night but ultimately it was a great show.On July 31st, Omar Souleyman played to a a hip crowd. This was perhaps the most famous yet underground act of the series. Souleyman performed in his native language with his signature stage setup of a DJ and a female back up singer. August 7th brought the Australia Rocks the Pier and Jagwar Ma. These bands are very famous in Australia. They are both young energetic performers. All the Australian’s in attendance really enjoyed the pier and the music. August 14 had Latin Waves – La Santa Cecilia with Sergio Mendoza. This concert had local Los Angeles bands playing mambo, cumbia, corridos, and pop music. The music is so happy and infectious. It was another perfect Thursday night concert at the Santa Monica Pier. August 21st was the Zombies show. These guys are legends from the 1960’s of England with tunes like “She’s Not There” and “Time of the Season”. Great concert for the older crowd of Santa Monica. August 28th brought Lee Scratch Perry with his DJ and back up singers. Mr Perry is one of the founders of Dub music. He worked with Bob Marley many years ago. Mr. perry doesn’t exactly sing. Its more like he talks or shouts at the audience. His back up singers bring a lot of energy to the performance. It was a great honor to see Mr Lee Scratch perry perform in Los Angeles. The final event of the summer was on September 11th with Charles Bradley. Also King James and the Special Men played. I couldn’t believe it when the summer ended. So many good memories. All in the heart of Santa Monica. What a joy. This was an incredible way to spend a Thursday. The experience magazine is looking forward to covering many more concerts at the Santa monica Pier.
Website;
http://santamonicapier.org/twilightconcerts/