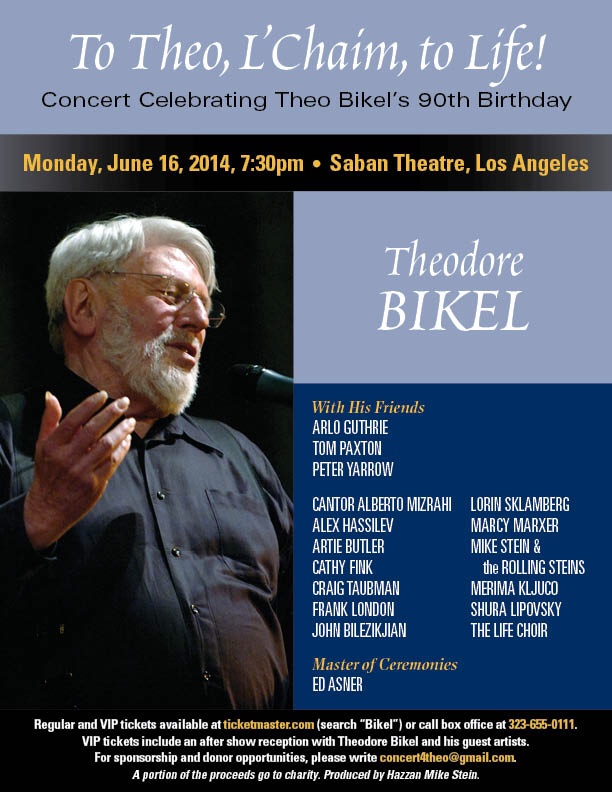 Theodore Bikel celebrates 75 years in show business with a concert in his honor at the Saban Theater on June 16th at 7:30 pm. Mr. Bikel has garnered distinguished recognition in music, film, and stage, with leading roles on Broadway as well as an Academy Award nomination. In celebration of his 90th birthday, he will be performing with some of his very talented friends, including Arlo Guthrie, Tom Paxton, Peter Yarrow, and many more! This event is supported, in part, by the Jennifer Diamond Cancer Foundation.

There will be a VIP/donors reception with Theo and his musical guests after the concert.
The Saban Theater is located at 8440 Wilshire Blvd. Beverly Hills, CA 90211

Theodore Bikel is celebrating his ninth decade of life and to help him celebrate, Theos friends are putting together a musical tribute.

Theos contributions to music, film, television and literature are astounding. Best known for playing the role of Tevye on Broadway and elsewhere over 2,000 timesmore than any other actor, he also created the role of Captain von Trapp on Broadway in the Sound of Music where the song Edelweiss was written for him to sing. He performed in over 35 stage productions in venues from Broadway to Israel to Londons West End.

But this is just a small chapter in Theos amazing life. Theo is also recognized and distinguished film actor. Theo made his film debut in the African Queen in 1951. From the Southern sheriff in the Defiant Ones (Oscar nomination), to the submarine captain in The Russians are Coming, to the Hungarian linguist in My Fair Lady he acted in over 30 major films. Most recently, he has written, performed and directed In the Shoes of Sholom Aleichem to be released this year!

Mr. Bikels television career spans 35 years. His roles on TV cover an amazing range of characterizations: from a Scottish policeman in Alfred Hitchcock Presents to Shakespeares Julius Caesar, to Henry Kissinger in The Final Days and the role which earned him his Emmy Award in 1988 for his role as the 82-year old Harris Newmark. He also played the German butcher infatuated with Edith Bunker in All in the Family.

Then there is Theos musical career! Co-founder of the Newport Folk Festival, he recorded 37 albumsover 20 on the Elektra label. Considered one of the founding fathers of American folk music he has sung with Pete Seeger and the Weavers and is responsible for the establishment of world folk music, singing and recording songs in Hebrew, Yiddish, Ladino and Russian.

Then there is Theo the man. A renaissance man, he is compassionate, philanthropic, principled and an advocate for justice. Theo marched with Reverend Dr. Martin Luther King in the fight for civil rights. He was president of Actors Equity, Sr VP of the AJC, Board Member of Amnesty International and a member of the National Council on the Arts. Theos inspiration instills a love of justice, Judaism, music and the arts in us all. To be with him is to be in the presence of greatness. Theos dearest friendsEd Asner, Tom Paxton, The Klezmatics, Craig Taubman, Artie Butler, Hazzanim Alberto Mizrachi and Mike Stein, Cathy Fink & Marcy Marxer, Arlo Guthrie and others all plan to be there to perform and to honor him. And of course, Theo himself will perform. Theo sells out houses as soon as tickets go on sale. He just sang to sold out houses at the American Jewish University and The Berklee College of Music in Bosotn and the crowd would not let him leave!!