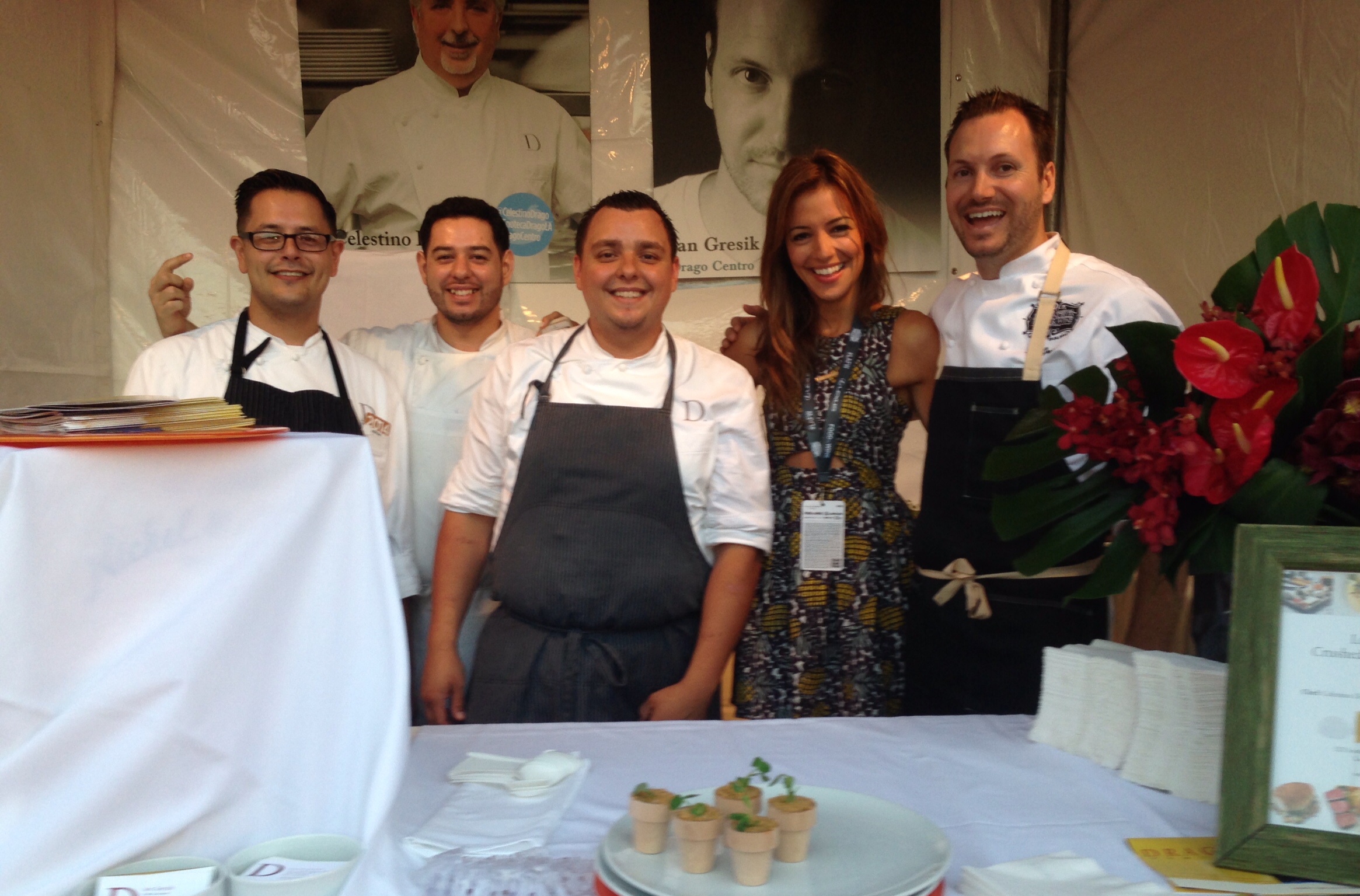 The Los Angeles Food and Wine Festival was Fabulous! Guests had the opportunity to taste celebrity chef’s food bites from around the world. There were gourmet creations and different types of wine. All of the chefs were friendly and eager to have you taste their creations. If you asked, they were delighted to take a picture with you. I was star struck as their picture was on the wall and they were actually serving each patron. This was definitely a highlight of the night, who would have thought a five star chef would serve you? There were so many chefs it was hard to narrow down my favorites, so I will just name a few. Chef Chad Colby created appetizing pasta with cream sauce, which was DELICIOUS! I went back three times. Then toward the end of the night, Chef Colby made this heavenly dessert (a type of custard). As I ventured to other food stations, with wine of course, I saw Adrian Giese who was speaking with the media. As he made eye contact with me, I was able to shake his hand. As you all know, this is a famous chef. I had the opportunity to dine at his restaurant in Costa Mesa (it is pricey, however well worth the dining experience). I also had an encounter with Chef John Cox who was very funny. The line was long but it was well worth the wait. His food was DELICIOUS and I went back to the end while eating the savory bite. Wineries were eager to pour patrons a glass of wine while explaining the grapes. They would tell you the year it was created. If you were lucky, the winemaker was standing at the station to greet you. My favorite wine of the night was from Kracher of Austria. I couldn’t get enough of this wine. It was sweet and tasty! Last but not least, “Common” the rapper and actor closed the wine festival with a spectacular musical performance! Everyone was dancing, even an older couple I met!
I did have the opportunity to attend the Los Angeles Food and Wine Festival two (2) years ago, and I had a fabulous time, but this year was INCREDIBLE! The organizers did a great job and I can’t wait for the festival to return to the City of the Star

The Experience recently covered the LA Food and Wine Festival 2014. It was the fourth year for the event and it brought together celebrity chefs and world famous vineyards. We were able to try unique gourmet food in a red carpet setting.
When we arrived on Friday, August 22nd, the Asian Night Market was in full swing. There were over 150 chefs preparing one-of-a-kind creations.
Our first stop was at Heitz Wine cellars for a glass of their legendary Cabernet Sauvignon. This is a fine wine with a crisp taste. It paired well with Seoul Sausage Companies Japanese Curry Rice Ball. Chef Chris Oh was happily serving his creation and topping it with Shoga Aioli. The line was long here. But people seemed happy to enjoy the atmosphere. The Disney Concert Hall made a great backdrop for the entire evening.
Ultimate Bites of LA had a top-notch area presented by Chase Sapphire Preferred. Graham Elliot and Fabio Vivani hosted this. In addition to providing a nice place to sit down, the food here was incredible. The first thing I tried was the tomato and mango appetizer. It was inventive and very fresh. Also popular here was the salmon on hand made cracker. It was a delicious bite. It had a light taste and very crisp.
The LA Food and Wine event was sold out. It was a once in a lifetime event. There were so many chefs and a lot of great cocktails.
One thing that was very confusing this year was the LA Food and Wine website. It has a lot of great photos of the chefs, but the event information is very confusing. It wasn’t clear what was going on and where it was going on. Aside from getting to Grand avenue at a certain time, there was no information on who was performing or what food was available. It would be nice to have a list of all the food available. People would then be able to sample all of the vegetarian items, or stop by all the California vineyards. Social Media was so important this year. The best way to keep up with who was presenting and what they were serving was by following @lafoodwine on Twitter.
Finally for desert, on Friday night, I stopped by Michelle Lee’s table. She had a delicious cake. This tasted great. You could really taste the fresh ingredients. What a great ending to our first night.
On Saturday night, we arrived early for the VIP portion of the Lexus Presents LIVE on Grand hosted by Michael Chiarello. This was a great chance to avoid the huge crowds. The first thing I did was I stopped by Ben Ford’s table. He was serving a taco that was just incredible. Each element of the taco was balanced. It was composed of fresh ingredients that had a gourmet. It was a real honor to meet him in the flesh.
Lorena Garcia was also a must see. She is the Venezuelan-born restaurateur who had everyone talking. Her bite featured a homemade tortilla that was amazing. People were talking about this dish. Ms. Garcia was chatting with people and enjoying the evening.
Chef William Bradley was serving a great fruit cup that had everyone talking. It was very simple. There was one raspberry with some mango and peach in a cup with simple syrup. It didn’t taste like what you’d expect. The flavor was light. It wasn’t too sweet.
One of the more interesting items served on Saturday night was the liquid nitrogen ice cream. You could eat this right out of the tank. When you would exhale, a plume of vapor would come out of your nose. They were calling it dragon’s breath. It was a must see.
My favorite bite on Saturday was Joseph Conrad. He is a James Beard Award winning chef. He recently became the Executive Chef at Bourbon Steak Los Angeles. Chef Conrad seeks out all natural, organic ingredients. His bite was simple. It was a Kampachi or Amberjack fish with a tiny bit of seasoning. The flavor was subtle. As fast as his team could prepare the fish, people were eating it.
Sunday had a Lexus Grand Tasting event at 12:00PM. This was a great opportunity to sample wine from over 300 wines from some of the most prestigious wineries. The event was held indoors at the L.A. Center Studios. It was a very exclusive event and offered some great gourmet vegetarian offerings. The stand out item was from Drago Centro. Drago is one of downtown Los Angeles’ premier restaurants. They presented a lobster salad in a miniature planter. It looked like a plant with a sprout coming out of the top. It was a delicious gourmet bite. It had a very refined taste.
Also a notable chef at this event was Andre Bienvenu of Joe’s Stone Crab in Miami. His bite also featured lobster. It was an epicurean bite with subtle spices.
Chef Jessica Koslow from Sqirl in Los Angeles also had a great bite. It was a Zucchini Socca Blini with California Caviar. This bite had such a great taste. The caviar was fresh and didn’t have any aftertaste. The zucchini blini were delicious and expertly made.
The Lexus Grand Tasting event on Sunday was a wonderful way to close the L.A. Food and Wine Festival. There were many chefs from Los Angeles on Sunday. The wine and the food were superb.