Listen to the new songs “Beam” and “Stare” (HERE) on Buzzbands.LA who described the group, “If it’s bold these days to create synth-pop without laptops and other assorted gadgetry, someone ought to carve statuettes of Los Angeles foursome LEX. The quartet’s self-titled EP embraces the sounds of vintage analog synths, a glossy feel that, combined with singer Alexis de la Rocha’s come-hither vocals, recall the long nights and short mornings of disco dreams. De La Rocha helms one of the band’s triad of synths, along with Leah Chisholm and Alicia Villareal, while drummer Jessica Ragsdale handles the rhythms. In making the EP, the quartet worked with producer Peter Franco, one of the engineers on Daft Punk’s Grammy-winning Random Access Memories, who coaxes a darkly romantic (and, if you were around for first-wave disco, deeply nostalgic) vibe from the band” (5/28/2015). 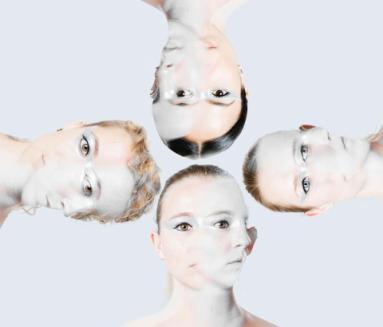 Created with all analog vintage synthesizers, LEX–ALEXIS (vocals, synthesizers), LP(synthesizers), LICIA (bass, synthesizers) and J (drums)–just released their self-titled debut EP May 5. For the EP, the group teamed with producer Peter Franco, the longtime Daft Punk collaborator who engineered Random Access Memories (2013) and won the 2014 Grammy Award for “Best Engineered Album” as well as “Record of The Year” for “Get Lucky.” Writing for Consequence Of Sound.net,  Ben Kaye described their debut single “Mystery Boy” as “Bouncing, dark synths juxtaposed against lead singer Alexis’ almost hushed coos give the track a sense of intrigue befitting its title” (March 27, 2015).