Exclusive Red Carpet Premiere for MADE IN ABYSS Compendium, Journey’s Dawn, to Take Place March 15 at L.A. LIVE in Addition to the Nationwide Screening 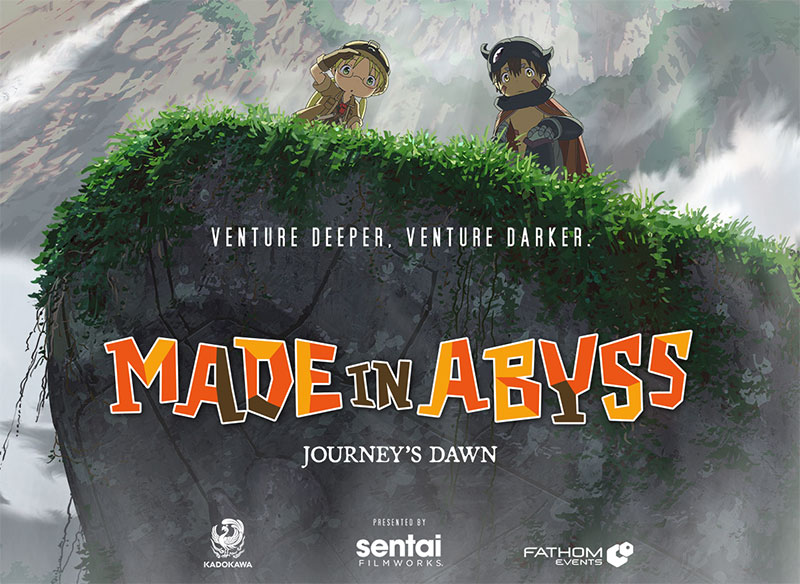 January 29, 2019 – Sentai Filmworks and Kadokawa Pictures today announced that its first film in the two-part MADE IN ABYSS compendium, Journey’s Dawn, will screen across hundreds of movie theater locations in the U.S. Heralded as an adventure that’s both hopeful and harrowing, Journey’s Dawn will be shown in theaters on March 20 for the Japanese with English subtitled screening and March 25 for the English dub showing. The MADE IN ABYSS television series took audiences by surprise and garnered ecstatic reviews with its disarming facade that shrouded a dark masterpiece. Now, cinema audiences can experience the timeless story with newly added scenes and dynamic storytelling.

Presented in partnership with Fathom Events, tickets for MADE IN ABYSS: Journey’s Dawn are available at participating box offices and online at www.MadeInAbyssMovies.com and www.FathomEvents.com. To give audiences a unique experience, the event will include behind-the-scenes footage, Japanese created spots and a reflection on how MADE IN ABYSS mirrors fairytales.

“On top of our major premiere event, we’re thrilled to present MADE IN ABYSS across hundreds of cinemas nationwide,” said John Ledford, CEO of Sentai Filmworks. “From the storyline, to the art style and music,Journey’s Dawn is sure to entertain fans and new audiences by allowing those to venture ‘deeper’ and ‘darker’ into this captivating film.”

The anime is based on the manga and original anime series, and one biggest selling points of the film is the art direction of Osamu Masayama who comes from a long career animating and overseeing animation at Studio Ghibli. His work helps to elevate the animation and artistic style of the film and works nicely with the skills of Masayuki Kojima, best known for his previous directorial role in creating the acclaimed Monster anime series.

The enigmatic Abyss is an unforgiving and deadly place. Despite the dangers, it still captures the imagination of explorers such as Riko who wishes to follow in her mother’s footsteps and trains hard to become a Cave Raider. One day, she receives news that her mother died in the Abyss, yet a mysterious note tells Riko that her mother may still be alive. Vowing to uncover the truth about her mother’s fate, Riko embarks on a journey with a humanoid robot boy name Reg. Together, they will discover if they have what it takes to survive where so many others have perished.

Information regarding both the movie and ticket sales for the Los Angeles premiere are available at https://www.madeinabyssmovies.com/.

Sentai Filmworks is a leading global supplier of anime and official anime merchandise, distributing, and curating one of the industry’s most diverse libraries of top trending and classic titles. Offering thousands of hours of content across both traditional and digital platforms, Sentai Filmworks is dedicated to bringing captivating stories and iconic characters directly from Japan with hit films that include No Game, No Life Zero, the Initial D Legend Trilogy, and Girls und Panzer der Film. Sentai Filmworks’ catalog continues to grow with new favorites like Bloom Into You, Revue Starlight and DEVILS’ LINE, as well as classic anime series such as Legend of the Galactic Heroes and The Big O. For more information, visit www.sentaifilmworks.com.