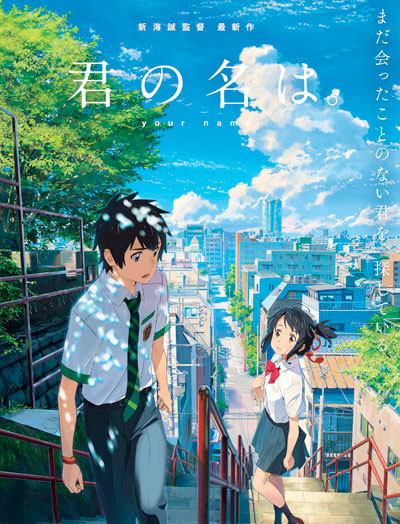 The Japanese anime fantasy film “Your Name.” directed by Makoto Shinkai is released on August 26th, 2016 in Japan. The box office revenue exceeded 2.7 billion yen (about $22.89 million) in just 8 days from the release. And the popularity has continued explosive. The box office reached more than 20 billion yen (about $175 million) as of December 2016.

“Your Name” is a beautiful story about time, fate and the hearts of two young souls. It follows two teenagers who have never met. A high school girl named Mitsuha who lives with her family in a rural town is fed up with her life in the countryside. She wishes to be a handsome Tokyo boy in her next life. A high school student living in Tokyo named Taki was in Mitsuha’s body when he woke up one morning. And Taki woke up in Mitsuha’s body. They spend the day of someone they don’t know while they are thinking “strange dreams”. This strange dreams continues to happen randomly. Even though Mitsuha and Taki have never met each other, they have gradually attracted each other.

The director Mr. Shinkai commented that the spotlight of this film is about the love story between Mitsuha and Taki at the screening of “Your Name.”. He made this film with the strong feeling that he retuned to his high school days. He thought a lot of people in their teens and 20s would see this film. Even their 40s can enjoy it because he wanted this film to remind them of the feelings they had in high school days.

The story is very unique – body swapping, time travel, disaster and love story. Shinkai talked about where the idea came from; he wanted to make something featured “dreams”. The dreams are not just dreams; they teach you or show you something and he kind of wanted to be true to that. He got a hint from the old Japanese fairy tails.

Mr. Shinkai was influenced by Hayao Miyazaki and Studio Ghibli (Princess Mononoke, Spirited Away, My Neighbor Totoro). A lot of people are saying that he is the next Hayao Miyazai, he really appreciates that but he knows that Mayazaki is the greatest presence in an Anime world and he cannot be the same. He has to do something different, and wanted to make it very different texture from Miyazaki style.

I not only loved the story but also loved the beautiful realistic pictures. I amazed the digital technology of landscapes, raining and lighting effects. Mr. Shinkai said the production used paper and pencil for character designing, then scanned them into computer, the background pictures are all digital, most of the film.

“Your Name.” will be released in the US in 2017. This film is not only for children and teens but also for adults. I highly recommend!!